I enjoyed reading these reflections from Andy Matuschak on his last year of independent research and found I could relate to quite a few points. He seems to have been quite successful at crowd-sourcing funding for his work and is in an interesting position to compare his situation to the alternatives of being an entrepreneur or academic.

I’m not interested in independence for its own sake. I’m interested in inventing environments which significantly expand what people can think and do. That aspiration is what drives my work, rather than a particular title, role, or practice. When I use phrases like “independent researcher” to describe my work, the title is a loosely-held shorthand for what I really value: freedom of inquiry.

So I work independently. Not because that’s an ideal arrangement, but because I don’t see a good alternative. I don’t yet know how to create or join an institution which would enable better work. Part of the trouble comes from working in a proto-field, without methodology or principles solid enough to effectively support a pipeline of new investigators. In fact, I don’t understand yet my own projects well enough to effectively coordinate a large team around them, though I could certainly put a few more hands to good use.

This is another article by Andy that I liked, particularly the discussion about action vs. achievement oriented goals.

Satisfaction and progress in open-ended work

When we’re in execution mode, we swim in signs of our progress. A day’s work stands crisply in some endless checklist: four problems solved; three features added; check and check. Am I on track? Did I...

^^^This 100%. I’m reminded of Brian Eno’s concept of scenius, which I absolutely love.

I hadn’t heard of a scenius before but Andy also references it directly in his article.

I want to be part of a rich scenius of serious, capable people doing full-time original research on enabling environments. I want to attend colloquia in which I’m regularly stunned by the ideas presented. I want peers who will candidly observe the limitations of my ideas, then work with me to improve them.

I don’t yet know how to make this happen. My proto-field has (hopefully) a proto-scenius: many part-time tinkerers, many startups doing research-ish work when they can spare the time. Funding is one limiting factor for a bloom of full-time work. But culture is another. This scene, as far as it exists, mostly draws its norms and values from tech culture—just as I originally did. I like the influence of arts culture on this scene, supporting a more expansive, playful design orientation. But I worry that we need a significant injection of research culture to support the patient, probing, self-critical work which can yield transformative insights.

I feel scenius ties into many parts of @brucecaron’s Open Scientist Handbook as well, particularly the idea that ‘The smartest person in the room is the room’.

Loving scenius! We really need to look at the built-in asymmetries of science gatherings… the assumption of privilege for speaking out, and the amount of silence required during the day. I’ve done workshops where, at the end of the day, participants complain that “their brain hurts” from so much conversation/cerebration in small groups… then, after beers, they confess they’ve had more fun than any other workshop they’ve been to. Done more work too.

Thanks Gavin for posting this article. This was on my to-read list for a while and I finally knocked it out today.

I’m particularly interested in the practical discussion of patronage. The comments about why his patrons pay him could be quite useful. His explanation of the patron-only content as progress reports that give credibility to his work seems plausible to me and was not something I had considered before.

Personally, I don’t think patronage would work for me, as my research is not of interest to many people. But I could be wrong about that. Andy Matuschak writes that he doesn’t think he could have had as many patrons without Twitter. I tend to avoid Twitter as I basically view it as set up to encourage drama. But lately I’ve been looking more at Twitter in areas adjacent to my own interests, in the hope of meeting people on there. I don’t see any drama in these parts of Twitter, fortunately. I tend to not network effectively and need to change that.

His discussion about how owning a house reduced his expenditures is worth considering. I’ve thought about buying a house in a cheap location in order to do independent research. There are parts of the US where a good house can be obtained for $150,000. But I wish he discussed more about how much his wife contributes financially. That possibly reduces his expenditures appreciably.

Andy discusses his funding a bit more in the first section of this video: 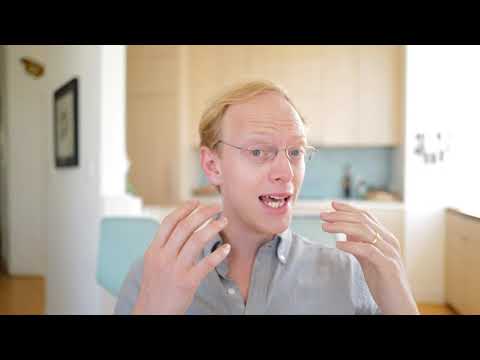 I pulled out two interesting sections from the transcript (available for his Patreons along with a lot of other interesting content) that compare traditional academic funding/expectations to crowd funding.

On the ethics of taking on students as an independent researcher:

I also feel there’s a moral challenge to taking on students for me in this field. If I were a professor at a university and an established field, and you come to me as a graduate student, then there’s this implicit deal. You work with me for a few years, and after a few years, you are going to step out as an independent investigator of your own and establish your own agenda. You’re hopefully going to be able to do that by, say, getting a faculty slot at some other university. It’s a pipeline. And of course you’re not guaranteed a faculty slot. In fact, there’s far too many graduate students for faculty slots, but that’s the understanding that you’re taking on this kind of apprentice position. You’re rolling the dice and saying: I’m competing for one of these faculty slots that are available at various institutions, and funding slots for those positions, which are provided by grant makers.

Now the moral issue is: that pipeline, that path, those institutions, and those funding sources don’t really exist in this space. And so if I’m taking on someone who’s excited about doing independent research of their own, they can work with me for awhile and that might be helpful to both of us, and maybe push my ideas forward, and maybe help them develop their own practice. But, there’s really no end state where they get a shot at doing it on their own. They’d have to create that for themselves. And arguably, they’d be put in a pretty bad position to create it by working with me as an apprentice for a few years because they’re not going to be amassing capital that they could use to support themselves. Maybe they could have been developing relationships with funders or with an audience or with grant makers, but they’re going to have to figure that stuff out on their own.

This lack of a next step for a student is a problem. It’s both a practical problem, but also a moral problem. I feel bad for taking someone on in this way when there’s not clearly a place for them to go next. So that’s one key difference between these funding sources.

On who and how funding decisions are made:

The last difference that I wanted to discuss between the NSF CAREER grant and the crowdfunding approach for research is this question of who gets to decide what to fund.

It’s really different answers in the two spaces. For an NSF CAREER grant, the most important part of the decision process is what’s called a merit review, wherein your proposed research is reviewed by about three peers or informed experts in the space that you propose to investigate. They will issue written comments and scores and have some discussions with coordinating officers who will then decide what to fund. It’s a relatively small number of high-expertise people, and that has advantages and disadvantages. So you don’t have to convince that many people, on the one hand. But there’s also a lot of problems with peer review. Perhaps these are people who are established in your field, and you’re trying to take your field in a weird direction, or maybe there isn’t really a field around the work you’re doing. There’s some concern that peer review tends to perpetuate stasis, or more conservative ideas. I think that’s probably at least partially true. Certainly in my adjacent field human-computer interaction, peer review seems to promote a set of fairly conservative values and processes that would really impede my work, I think.

In the crowd funding model, on the other hand, you have lay-people or interested fans deciding that work is interesting, and you have to persuade hundreds of them, instead of just a couple. That seems harder. But then, you don’t have to persuade them very hard. Merit review is kind of a high stakes thing. I think these reviewers feel like they’re setting standards for a very important institutional body, so they’re going to be kind of defensive about what qualifies and what what’s worthy. But a patron deciding to toss you five bucks, even five bucks a month? It’s just not that high stakes, by comparison. So while you have to convince a lot more people, you maybe don’t have to convince them very hard. And that’s interesting.

It’s also interesting that they are much less likely to be, say, experts or peers or something like that. Now, obviously I do have a lot of funders who are experts and peers, and I’m grateful for you. Uh, but a lot of them are just like random internet people who find the work interesting. Which is great! This is good in that it means if you have this work that doesn’t really like fit in, but other weirdos (who maybe aren’t high-status or high-power) think it’s interesting, then you can maybe cobble together some funding through crowd sourcing that might be difficult to achieve through traditional channels.

But a challenging part of this is: to what extent can the crowd actually evaluate research? In my case, I worry that, if I were investigating something that was like equally important, but less obviously legible to casual observers, that I would have a lot more trouble getting funded. And that’s a real concern. I worry that this general effect might make crowdfunded research more boring. Or maybe more driven by fashion or mass market appeal.

I’ve thought about trying to get popular funding for my own research, but I generally feel that I’m not as good at creating broadly popular content/pitches as I am at creating applications tailored for specific funders.

Now for Andy’s reflections on 2021

He discusses the dynamics he’s observed with crowdfunding further and how he’s learned to enjoy (rather than suffer through) the process of creative work.

I particularly related to how he articulated the difficulties of planning research projects in the context of teamwork. I also find that most productivity methods I’ve tried applying to my own research work become unstuck due to similar uncertainties. Maybe grantors should also take note - the detailed plans required on many applications can’t be followed in practice!

Experimental software development doesn’t really work like this. Sometimes you’ll understand some sub-project well enough that you can specify a few weeks of execution work, but there’s no guarantee that the “incoming” rate of well-defined projects will match the “outgoing” rate of projects completed. In practice, I found that I could often specify only a couple days worth of effort in a particular direction—and sometimes that articulation would require half a day or more of preparation! Figuring out what to do is often the most time-intensive step of these projects. In many cases, I could only see what to do next after the last small increment was completed.