A Critical Conversation with Alexandra Elbakyan

Hi all, I just discovered this article about Sci-Hub and Alexandra Elbakyan.

It takes the form of a conversation and might sparkle some interesting discussions about Open Science in this place, too. I have always had very much conflicting feelings/thoughts about Sci-Hub (for obvious reasons), yet it has and still continues to make my day quite often when I hit the paywall.

I also use a lot the Unpaywall browser extension, and that, too, has saved my day quite a lot

Thoughts on this article? On Sci-Hub?

PS: if there is a similar post, I apologize for double-posting!

I haven’t read the article yet, but this reminded me that Alexandra also presented at the RIOT Science Club earlier this year (although I haven’t watched that either). 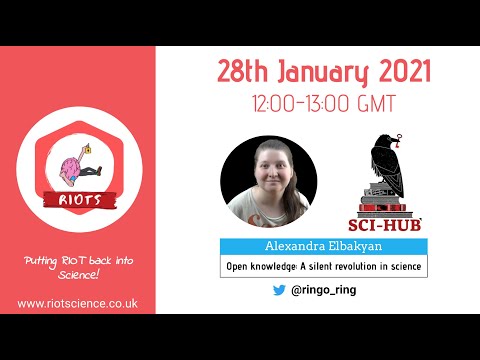 I’ll come back with some thoughts on the article. Thoughts on Sci-Hub? It is a necessary part of my work as an independent researcher (honourable mention to LibGen as well). I don’t really feel bad about not paying publishers to access something which should be a public good.

I actually think that the legal status of Sci-Hub will improve in the near future (at least in some jurisdictions), as for instance, a lawsuit against Sci-Hub (and LibGen) in India looks like it is recognizing the sites positive aspects more than Western courts have and the court has, for instance, allowed Indian scientists who use Sci-Hub to submit supporting material. More at: http://infojustice.org/archives/42977

Thanks, @Gavin - I had not seen this news around legal framework, yet, very interesting.

I had seen the RIOT video, though - cool stuff!

I read the article now. To be honest, I found the title a bit misleading, as the tone of the interviewer’s question generally seemed neutral to sympathetic, and nothing that was particularly critical or challenging of the Sci-Hub project was asked (well the legal problems got brought up but they are kind of old news). Still, I think found Alexandra’s perspective to be quite interesting.

Two responses that I thought were particularly interesting.

Q: … is there any ideological impetus behind the Sci-Hub?

A: Regarding the ideology, I always viewed Sci-Hub as a communist project, because its idea is that science should belong to everyone, to all people, and it is not right when knowledge becomes a private property [8] of some corporation such as Elsevier, accessible only to the elites. Sci-Hub is against the idea of intellectual property, there can be no ownership of information and knowledge, it is a common thing.

It’s interesting to consider that Merton’s academic norms include communism (although it’s sometimes changed to communalism). Do Western researchers need to move back to the communist ideals of academia? Do Eastern researchers generally do a better job in that regard?

A: … Do you think that Sci-Hub is associated with the openness philosophy? If yes, how, if no, why?

Q: From the very beginning, I considered Sci-Hub to be an Open Science project because Sci-Hub is a tool to open access to research papers. The whole point of the Open Science / Open Access movement is to make science available for everyone, and that is what Sci-Hub exactly does. Some Open Access advocates such as Peter Suber do not endorse Sci-Hub because it is not legal, and even gave its name of ‘black’ open access model, the legal models being ‘green’ and ‘gold’, but in my view, Sci-Hub is the only effective open access method by now, and I hope it will be eventually considered legal. Why should reading academic journals be considered illegal, after all?

Well this is kind of the crux isn’t it, open access has to provide effective access to academic research for everybody, and when Sci-Hub is accessible it’s the leader at that.

It’s interesting to consider that Merton’s academic norms include communism (although it’s sometimes changed to communalism). Do Western researchers need to move back to the communist ideals of academia? Do Eastern researchers generally do a better job in that regard?

These are very interesting questions! I believe the mertonian norms could help us going (back) to the right direction

Implementation wise, though , well that’s another story I guess. Thanks for the feedback

And: Archivists Are Trying To Save Sci-Hub