Society for the Improvement of Psychological Science (SIPS) - the leading open and replicable science society in psychology - sent out a message to the community yesterday. I believe the message came as a response to increasingly loud voices (mainly on Twitter, I believe) criticising SIPS for not taking diversity issues seriously enough.

There is a hashtag on Twitter called #bropenscience; a critique aimed at the open science movement for having too many white (CIS) men on the movement’s frontline.

This critic was raised already at the 1st SIPS meeting in 2016, where it apparently was questioned why the white men (e.g. one of the SIPS founders) talked more than others on a discussion panel. A male researcher then publicly questioned whether that critic actually was important given the devastating state of psychological science which was the focus of the conference. He has described the reactions he got as public shaming, and he has never again attended a SIPS meeting.

Jordan Anaya, founder of PrePubMed and one of the metascientists behind the Pizzagate paper that showed how problematic Prof. Brian Wansinsk’s research was, attended the SIPS meeting one or two years ago. I can’t recall that anything particular happened during that meeting, but apparently something has happened at least afterwards. He recently wrote on Twitter that he finds SIPS putting way too much focus on diversity issues and that a new recurring conference would be needed to actually focus on open and replicable science. It was a series of posts. In one of them he called diversity-focused people in SIPS “fucking retards”.

Apparently a couple of SIPS members liked the “fucking retards” post. A SIPS board member reached out in private messages to those SIPS members and convinced them to ‘unlike’ the post.

Additionally have there been other discussions on Twitter involving psychologists defending freedom of speech and opinion versus psychologists who claim that the open science movement in psychology isn’t diverse enough and that there are serious problems with harassment in the movement.

The discussion in psychology and the open science movement should probably not be viewed in isolation from the same infected discussions occurring in academia in general, that seems to have started in North America and is now successively spreading to Europe. I recommend listening to this (https://samharris.org/podcasts/forbidden-knowledge/) episode of Dr. Sam Harris’ (psychologist) popular podcast if you want to learn more about this infected topic in academia. I personally hadn’t heard about these issues in academia until last year, 2018, and the Sam Harris episode was what got me started. In particular was I shocked to learn about the Dean Spellman case (https://www.theguardian.com/us-news/2015/nov/13/dean-of-students-resigns-claremont-mckenna-college-mary-spellman-california). I recommend searching on YouTube for recorded student protests, where a crying Dean Spellman, after a couple of hours of protests, is accused by a student to never be able to “change your heart”.

Below is thus the message from SIPS sent out yesterday to the community.

SIPS is committed to providing people with a harassment-free experience at our events.

Those are not just empty words. That commitment is expressed in our code of conduct. The code of conduct goes into detail about what we will do if an incident happens at one of our event sites. If someone faces intimidating or abusive treatment online because of their participation in a SIPS event, we find that just as unacceptable. Nobody who is treated that way should have to worry that their harasser will come to the next SIPS event and do it in person.

Fulfilling that commitment when incidents happen outside of SIPS event sites raises practical considerations. We can’t actively monitor the Internet. But if we receive a complaint, we can look into it. If something happens in public and somebody in leadership sees it, we can act on that too.

Another practical consideration is who to take action against. We don’t consider current membership or registration status to be a decisive factor – “don’t harass people” is not something you only opt into when you pay your SIPS dues. But we will consider whether someone is likely to attend a future event, or is leading others to believe they are likely to.

When we decide to ban someone from SIPS events, we will notify them when practical, rather than waiting to see if they try to register. That gives them a fair chance to appeal if there is something important we haven’t considered, without introducing a long delay between the decision and when they can gather evidence. It also puts them on notice that they are not welcome at any SIPS events – including ones that we don’t manage registration for, like meetups and preconferences.

To be clear, this is not about punishing wrongdoing or enforcing behavior standards in the world at large. We can’t police the Internet, and we are not going to try. The guiding question in any decision is whether banning an offender (or any other action we might consider) serves our goal of protecting people from harassment at SIPS events.

Please also understand this is not about curtailing criticism, dissent, or opposing viewpoints, all of which are valued by SIPS. Harassers often claim the mantle of free expression, when the opposite is true: Harassment is a threat to free expression.

This approach I have described here was not created in a vacuum. Although SIPS is a relatively young organization, harassment is not a new phenomenon and other organizations have had to deal with it as well. We have drawn on their experience and expertise and followed best practices in developing our approach.

Harassment is an inherently uncomfortable topic. It can be especially unsettling to watch an anti-harassment commitment put into practice when it involves people who are visible or connected in the community. I hope that this message has helped clarify how we approach this difficult but important issue. As always, anyone with feedback can contact us at sips@improvingpsych.org.

Related to this, some thoughts from Brian Nosek on the Twitter discussions. I believe this might be less about diversity though; I just hear people complain about Uli Schimmack, but I haven’t myself seen him write anything related to diversity (just generally a very harsh tone against bad science).

@wgervais @VandekerckhoveJ @priyasilverst @BrentWRoberts @JPdeRuiter I have more words to share. I thought about it all the way home from the ropes course with the kids, and have a proposed solution for your critique. Here: docs.google.com/document/d/1qj…
katie (Katie) September 4, 2019, 9:16am #3

Hi Rebecca, I read your post but please could you clarify what your position is on this. Are you proposing that SIPS is focusing too much on diversity or are silencing certain opinions or something else?

Hi Katie, welcome to the forum!

In the post above did I simply try to retell the raised issues and give people a chance to learn about it if they didn’t know already. I personally find it very difficult to follow these issues on Twitter and I’ve met several people (incl SIPS-members) who are unaware of the past and current debates. To them might the letter from SIPS come completely out of the blue and it might not be possible to understand what type of harassment SIPS members are struggling with (do I risk my life & health if attending a SIPS conference? should I leave my family at home just in case? is it unsafe to attend the conference as a woman without a man escorting me? is it dangerous to be involved in open science in North America? which religion or party do the harassers belong to and for whom would it be safe to attend the meeting? etc).

Where do I myself stand? Well I wasn’t happy to receive the letter from SIPS because I do worry about the implementation: Who will be excluded from events and who will not? What will the criteria be and how objective? How transparent will the process and decisions be?

I would prefer if everyone was welcome and that eventual wrongdoing was handled when/if they occur. I myself have a personal background that makes it morally impossible for me to throw the first stone (or any stones really). I therefore have a very high bar for what behaviours and words I can live with from others.

I also think that the letter from SIPS mirrors the ongoing debate in North American academia, and that a similar scientific organisation in Africa, Asia, Europe, South America, Oceania, possibly wouldn’t have sent out a letter like that. (Not yet at least, but perhaps will at least parts of Europe be there too in some years from now.) This is not necessarily a bad thing, but it could be worth reflecting on, especially if aiming to reach potential attendees beyond WEIRD countries.

I had missed this, but yes, Jordan Anaya was banned from SIPS about a week bedore their public message to the community (my original post). He was banned for tweeting inappropriately about a SIPS session on diversity. He was not an attendee at the conference, he merely tweeted about it. 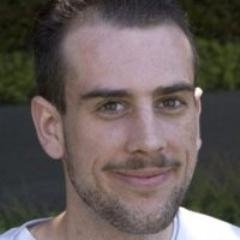 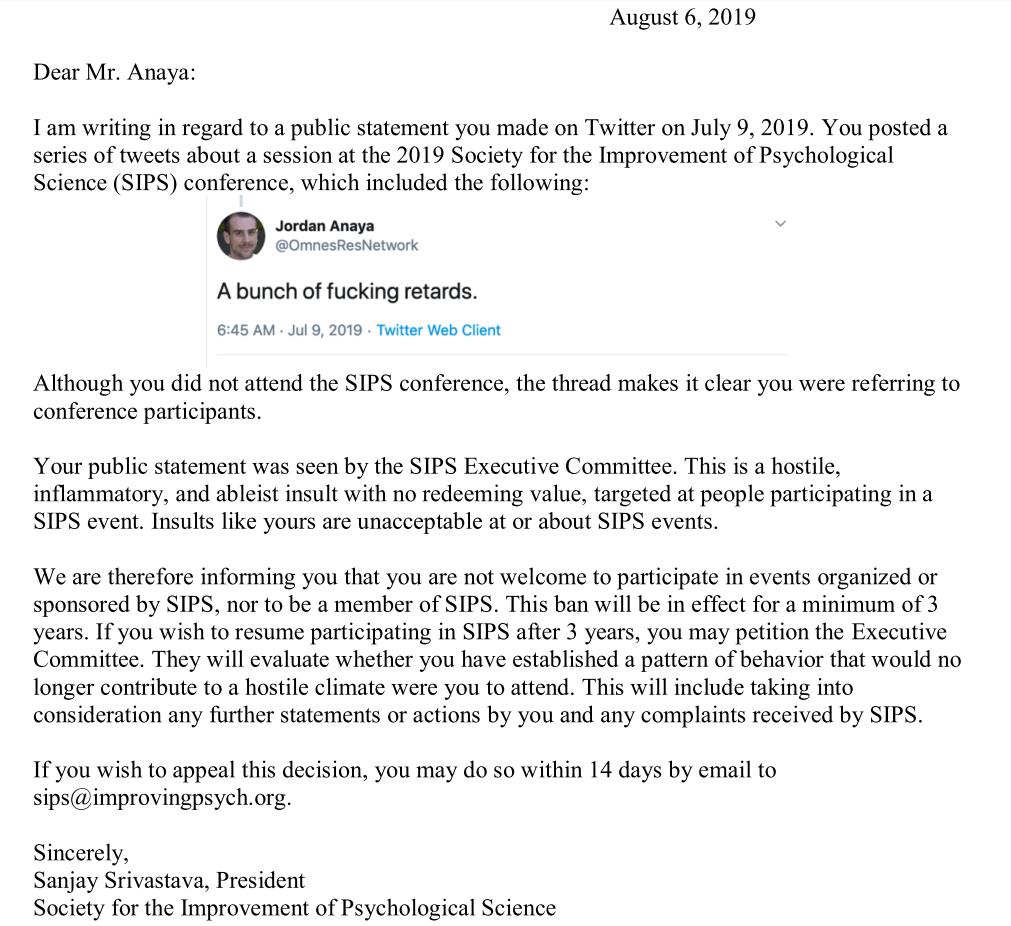