I’m quite impressed by how this researcher transitioned to independently doing rodent research from his garage with a transferred NIH grant and an Institutional Animal Care and Use Committee. It looks like this transition was facilitated by Bove already being a senior professor with existing funding and connections to senior academics/collaborators, but it should offer some inspiration for others who want to start doing experimental biology work independently. (h/t to Alexey Guzey at New Science)

Could be of interest to @Jelle and @alex.lancaster (what about a Ronin IACUC?) 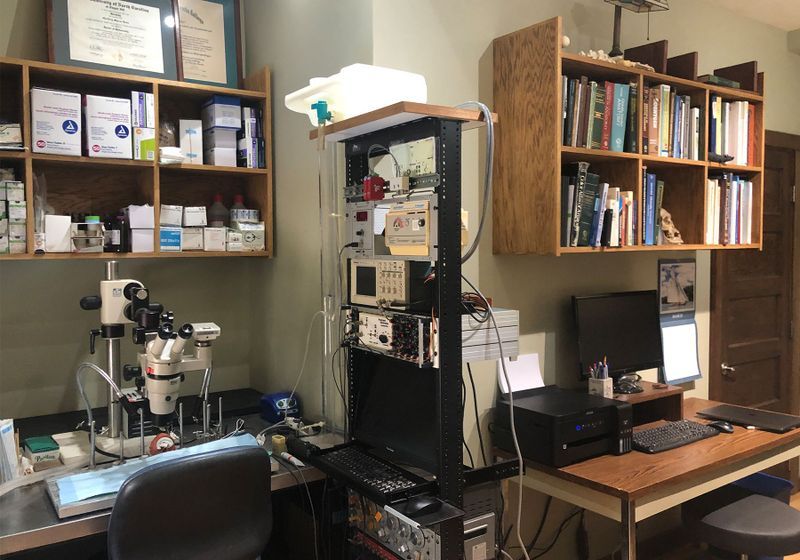 After resigning from the University of New England last year, Geoffrey Bove continues to study the effects of massage on rats in a facility he set up in his house.

On a video call from his home in Maine, Geoffrey Bove gives me a tour of his animal facility. In a small room off his garage, he points out equipment for conducting electrophysiology recordings on anesthetized rats, an area to clean out the rodents’ plastic cages, and a rack where the enclosures are stacked. And he shows me his rats, to which he gives regular massages as part of a project to see if such manual therapy—a form of complementary and alternative medicine—can prevent or treat the development of fibrosis.

So, in late 2019, he finally made the leap. He began planning his animal room in a space with a private entrance where he used to see patients as part of his chiropractic clinic, installing a separate HVAC system, among other upgrades. And he transferred his R01 grant, which he held jointly with Temple University anatomist and cell biologist Mary Barbe, to his sole proprietor company, Bove Consulting. In January 2020, he gave UNE his notice.

pursuing an OLAW assurance, which is required to house and work with laboratory animals. … To obtain that assurance, Bove needed to assemble an IACUC with the requisite members. Bove asked retired pharmacologist David Mokler, his longtime friend and colleague—and his former boss at UNE—to be the chair. The two had already had many discussions about Bove’s desire to leave the university, and Mokler says he had his doubts about whether Bove could pull it off. “When we first started talking about this a few years ago, I said, ‘Geoff, you’re never going to be able to,’” recalls Mokler, who is now retired. But Bove was persistent, Mokler adds. “He says, ‘What are the regulations? What is it that says I can’t do this?’” So when Bove investigated and determined there was no reason he shouldn’t be able to head out on his own, Mokler agreed to chair his IACUC. Bove, he says, is “one of the most innovative people I know.” Bove’s OLAW assurance came through on June 1, 2020. “The timing couldn’t have been better,” he says. A couple of months later, he received his first shipment of animals.

The setup that Bove uses now works well, according to Barbe, but the transition from UNE to Bove Consulting in the midst of his NIH-sponsored research project took quite a few conversations and a lot of paperwork, she says. “A big group of people worked for three [or] four months to make sure all assurances were correct, complete, compliant.” Then again, “that’s really the life of a scientist,” she adds. “There are many rules, regulations, and you just have to be willing to understand them and do them and comply.” Bove approached the task intently, she says, and as a result, “he’s still a scientist and he’s doing scientific research.”

“This work might be considered a little more fringe,” says Eric Chang, a neuroscientist at the Feinstein Institutes for Medical Research who has not worked with Bove or Barbe. “But judging from the work alone, it seems to be well conducted and with controls.”

I think this is a very interesting story!

I am however quite concerned about the ‘independence’ of the IACUC that gave him his approval (if I understand it correctly), since he basically assembled it himself. In Belgium this approach wouldn’t work, since the ethics committees that are involved in animal research are usually linked to institutions and should be truly independent. This means that a Ronin IACUC also wouldn’t satisfy the requirements to do such research in Belgium.