I feel it is important for the IGDORE community to be aware of this, and to possibly discuss some elements surrounding it openly.

We are not judges here, but some of us were tagged and involved in some discussion on Twitter yesterday. Originally, I did not understand the point - what was up to. Your statement is also very general and concerns, as we see, your behaviour related to harassing others in the Open Science community. I do not know the details what you did. You apologised, and forgiveness may come though. Again: not me was or is harmed so someone else can speak. However, it is said that you were banned in 2018, but I know that in 2019 you talked about your organisation per “we” (http://www.eurodoc.net/news/2019/interview-with-jon-tennant-on-open-science-mooc). So was that ban decision binding or secret? I do not understand also why the case became so famous last days. Is your former community asking you for more explanations? Or trying to condemn more? It is difficult to follow all these tweets I saw last minutes and all these statements here I have just noticed, without having known the people writing, the context, and the situation, and you personally.

i think jon is trying to follow the standard set by the opencon code of conduct, that is providing no details about the “violation moment”.

i myself follow religiously all updates on twitter about this, compile them for record, and attempt to see ALL sides of argument.

i plan to meet jon if he comes to bali next month and would talk in person to clarify everything related to this case.

i’ve also used hypothes.is to comment directly on the reply above: Welcome to the forum, Dawid and Surya!

I personally very much appreciate the discussion being moved from Twitter to this forum, where it is possible to discuss in a more thorough manner. My experience is that thoroughness tend to increase understanding, which I believe is particularly important on sensitive issues like this one.

I don’t know whether @jon_tennant reads this or not. I think he’s taking some time off internet, Twitter in particularly, at the moment. Which I can completely sympathize with. There are however a few things in Dawid’s post above that is possible for others to answer or clarify.

Your statement is also very general

As Surya replied, OpenCon has a policy of not making any details public, and my understanding is that Jon would break that confidentiality by himself saying anything about what behavior the ban actually refers to. We are thus all in the exact same position: no one has any details at all but there are a lot of public speculations. I personally believe that all the speculating has been and still is quite devastating for Jon’s case.

You can find OpenCon’s definitions of sexual harassment here and below are examples of such harassment from their Code of Conduct:

Some examples of sexual harassment include (but are not limited to):

However, it is said that you were banned in 2018, but I know that in 2019 you talked about your organisation per “we” (http://www.eurodoc.net/news/2019/interview-with-jon-tennant-on-open-science-mooc).

Hi everyone, Please can I add a few points? 1- I think the Open Con statement mentions harassment, not sexual harassment, and if you look at their definition of this it includes quite a variety of things, including whistling and making jokes. 2- Jon has sent an email to Open Con asking why they have chosen to release the information, publicly, after 1 year. As yet he hasn’t had a response. 3-although Jon apologised for the act he was banned for he isn’t confessing to the allegations that are now on Twitter. 4-unfortunately the vagueness of the Open Con statement has led to a lot of speculation and input from 3 or 4 former girlfriends who seem to be using the forum for a bit of a rant! 5- Jon is now talking to lawyers regarding the statements now made on twitter which are untrue

Thank you, @Rebecca10, for your input. It’s really appreciated. Since there are so much speculations by so many people online, of which many have never had any personal contact with Jon at all, perhaps would it be good to clarify how come you have this information but not others. My understanding is that you are Jon’s sister, right?

You were perfectly right about the OpenCon statement not mentioning sexual harassment. Actually, it doesn’t even mention harassment. Below is their complete statement (here’s the link to it):

Statement from the OpenCon Code of Conduct Committee Regarding Jon Tennant

Posted by OpenCon Code of Conduct Committee 0SC on October 31, 2019

[October 31, 2019] The OpenCon Code of Conduct Committee has decided to remove Jon Tennant from the OpenCon community and disallow his participation in future OpenCon events—in-person or online.

Details about OpenCon’s code of conduct policies, including instructions for submitting a report, are available at https://www.opencon2018.org/code_of_conduct.

I am his sister yes 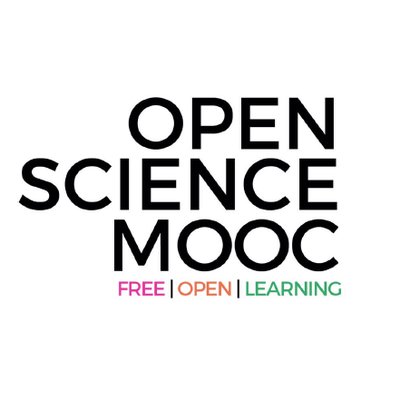 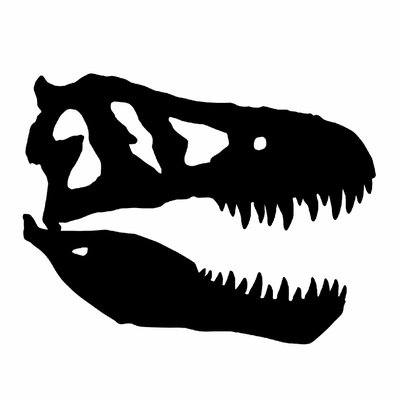 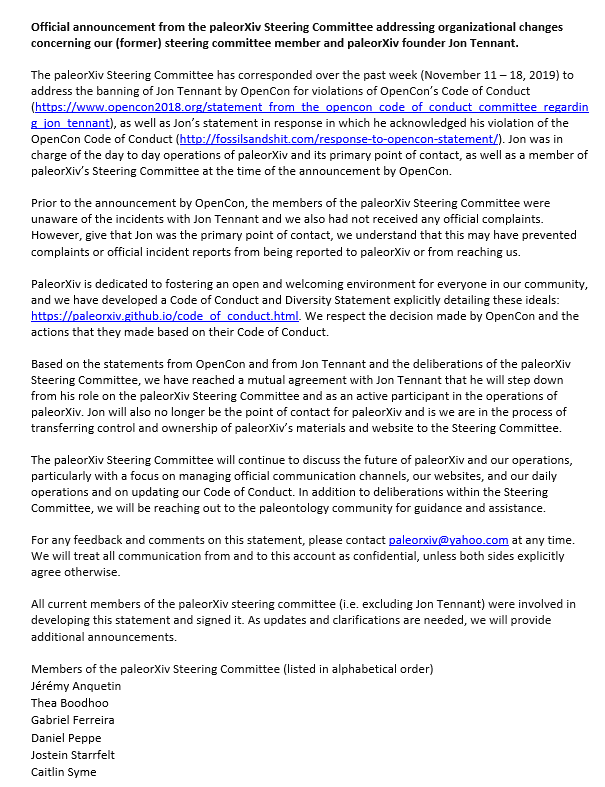 does anyone know of any case like this? it would be good to have more data on cases like this.

Official Announcement from the IGDORE Global Board Addressing OpenCon’s Ban...

One of IGDORE’s researchers, Dr. Jon Tennant, has been banned from OpenCon for violation of its Code of Conduct (CoC). Dr. Tennant has…

Hi everyone, here is an update on this matter: http://fossilsandshit.com/re-opencon-code-of-conduct-committee-statement/

And now another update… http://fossilsandshit.com/re-opencon-code-of-conduct-committee-statement-update-2/

Hi folks, here is yet another update to this ongoing saga: http://fossilsandshit.com/re-opencon-statement-update-2/

After 10 weeks and a formal FOI request, I am still no closer to figuring out what has happened here.

Would love to hear thoughts on this from others.

I have had a quick look at these articles as you post them @jon_tennant. With regards to your FOI requests, I originally sympathised somewhat with OpenCon because (I assume) this is a volunteer-run organisation and I could understand if it took them a bit longer than expected to organise the information you asked for. However, their continuing delay and uninformative responses do not seem to be consistent with the actions of an organisation that is well managed and has confidence that it took the right actions on this matter.

As I don’t know you personally or have any first-hand experience with OpenCon and the culture of its members, I don’t want to comment about whether their ban on your attendance was an appropriate response to the incident that took place. However, the manner in which OpenCon publicised your ban did seem intended to cast suspicion onto your reputation and, in my opinion, went beyond the role of the CoC committee to protect their participants. This was at best unprofessional and, at worst, contrived as punishment beyond that of the ban.

I hope that you are able to receive answers to the questions you’ve asked OpenCon and resolve this matter in some way. I also hope that other academic organisations look at this incident when considering the terms of their CoC and how they enforce it. The role of a conference CoC should be to protect participants while still facilitating interactions between them, but an incredibly detailed and restrictive CoC that goes beyond common sense and the law seems more likely to stifle discussion by causing everybody to walk on eggshells, particularly if they expect to publicly exposed and persecuted for even a minor transgression.

the manner in which OpenCon publicised your ban did seem intended to cast suspicion onto your reputation and, in my opinion, went beyond the role of the CoC committee to protect their participants. This was at best unprofessional and, at worst, contrived as punishment beyond that of the ban.

Indeed. Especially the 2-3 year delay of the publication is unacceptable.

@jon_tennant, this has taken a serious toll on your health, as you write. I’m so sorry this has happened and that OpenCon continues to defend their unprofessional actions. As Gavin said, hopefully this will at least make other organisations think a bit more about their own CoC’s and how they enforce them.

I can only agree to Gavin’s and Rebecca’s posts. I am sorry this happened, and that you are suffering such serious consequences.

I guess I should keep posting these updates here, rather than multiple threads. I’ve posted another new post relating to this, about what ‘academic mobbing’ feels like. http://fossilsandshit.com/what-academic-mobbing-feels-like/

Also, thank you all for your thoughtful comments on this. I will continue to make as much as I know as possible transparent about this.

My concern is jon’s livelihood in the future. I had my suspicion that the opencon announcement was intended to shut jon’s livelihood and consequently, voice, and nothing has transpired so far to disabuse me of that suspicion.

In many cases of cancel culture, the cancelled people are really powerful and have a lot of resources to fall back on. To my mind, jon is not such person. His power is his voice, and what opencon did was truly thoughtless, bordering on criminal, especially with their continued non-interference with jon’s online mob.